I am a professor with a Ph.D. in Curriculum Theory and Women’s and Gender Studies, working on an MDiv with a concentration in Christian Ethics. I created this blog as a bridge between those two worlds—education and theology—to make sense of it through the social, cultural, political, economic, etc., contexts that shape us.

It should come as no surprise that they’re coming for Pete Buttigieg. He’s smart, frank, funny, personable, courageous~~everything in a politician that would constitute a threat to the one of the least popular incumbent presidents history. Strategically that’s why he’s already under attack. How he’s under attack represents low hanging fruit politically. Pete Buttigieg is a gay man. It’s low hanging fruit because this fact inflames–really inflames–the roughly 25% of Evangelical Christians in America who make up the president’s strongest base.

On April 25, 2019, Franklin Graham Tweeted (naturally) a response to Buttigieg’s candidacy, “God doesn’t have a political party. But God does have commandments, laws & standards. Mayor Buttigieg says he’s a gay Christian. As a Christian I believe the Bible which defines homosexuality as sin, something to be repentant of, not something to be flaunted, praised or politicized….” 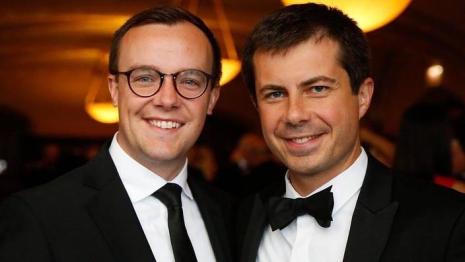 Earlier in April, an NBC report suggested that Graham’s view is out of sync with that of most Americans. Polling data indicate that almost 70% of Americans would be either  “enthusiastic” or “comfortable” voting for a gay or lesbian candidate (USA Today). The remaining 30% is Trump’s hard core base and includes the 25% Evangelicals who enthusiastically support him regardless of evidence of impropriety. The Fox News/fake news true believers. My people.

I come from generations of Fundamentalist Christians, growing up in the Church of Christ~~a denomination that historically refrained from political engagement beyond the civic duty to vote. But even voting was private~~between you and God. We believed that “rendering unto Caesar” meant that our faith was personal and would come full circle on Judgement Day. All of that began to change with the campaign of 1980, when Ronald Reagan challenged the Son of a so-called New South, Jimmy Carter. Precisely because our denomination had not been political, the shift was very noticeable.

On April 26, David Gushee, Distinguished Professor of Christian Ethics at the McAfee School of Theology, Mercer University, and Director of its Center for Theology and Public Life, spoke with CNN’s Don Lemon in response to Graham’s Twitter attack. Gushee’s book Changing Our Mind traces his personal and theological journey toward inclusion of LGBTQ Christians (it’s in my Kindle as we speak!). (Franklin’s remarks, incidentally, make Changing Our Mind doubly applicable in light of the United Methodist Church’s February 2019 decision to exclude LGBTQ members from ordination and marriage.) A disclaimer: I am a student at McAfee working toward an MDiv and certificate in Christian Ethics, and I will take Christian Sexual Ethics with Dr. Gushee in the spring. His ethics are grounded in Jesus’s Sermon on the Mount and outlined in the seminal book on the subject: Kingdom Ethics: Following Jesus in Contemporary Context (2016), co-written with the late Dr. Glen Stassen. Although he wouldn’t do it because of his ethical convictions, I would put David Gushee’s understanding of Jesus’s teachings up against Franklin Graham any day. But again, I have a dog in the hunt.

I had an “ah-ha!” moment as the CNN interview concluded:

LEMON: ...I think it’s interesting that you say that the Christian right has been in the grip of the Republican Party for 40 years now and it’s getting worse….

Forty years. Reagan, the Moral Majority, Trickle Down Economics, strengthening the military-industrial complex, unregulated capitalism, corporate tax cuts~~the most significant political and economic ideological shift in U.S. history~~and I was there. I saw. From the pews of a little country church in North Alabama. My people~~those 25% die hard Trump supporters~~were the strategic targets of the Republican machine in 1980, and we remain in its grip today. I am not suggesting we are absolved of our complicity; we have not yet repented of our collective sin of racism, for example. I’m saying the Republican Machine (not persons who vote Republican, whom we love as Jesus loves) is like a crooked preacher: it knows the Bible well and uses it to sway the sheep. It uses cultural context or insists on literalism, whichever best advances its agenda–which is, again, to inflame good people to vote. Over nearly half a century, it has accomplished an astonishing goal, really: creating god in a Republican image and we, my people, worship at its feet. That’s called idolatry, y’all. Gushee’s Kingdom Ethics suggests a different way, a Jesus way, to do politics together as a people, but to see it we will have to melt the Golden Calf of the Republican god.

My people believe~~really believe~~that electing a gay man as president will doom the U.S. as God turn’s His (no gender free God here!) back on us. In fact, we see plenty of examples of how He is already exacting His punishment on us as a call to repentance~~a call to return to being a Christian Nation, God’s U.S. chosen people. I know a good man~~a Godly man~~who believes God is sending a meteor toward Earth as retribution. “We better turn back to God,” he says, “or He will destroy this sinful nation!” When Franklin Graham reminds Evangelicals that God’s “laws, commandments, and standards” supersede political parties, he gives them no option save worshiping the carefully crafted Calf. And yes, he precisely politicized Buttigieg’s sexuality. I know what my people will say to an interpretation of scripture toward a new Christian Ethic where Pete is evaluated as a candidate by his qualifications rather than as a person based on his sexuality. They will say, “Even the demons believe, and tremble” (James 2:19). They will be suspicious; they will believe they are being tricked by fast talkers and twisting scriptures. They will gather more closely around the Calf.

In a speech in early April, Pete said his relationship with Chasten had made him “more compassionate, more understanding, more self-aware and more decent.” He then directly addressed Mr. Pence, “as one man of faith talking to another,” the New York Times aptly puts it: “And yes, Mr. Vice President, it has moved me closer to God.”

That’s my favorite part because I identify with it. My relationship isn’t just a good fit in which I found a life companion~~it has brought me, in-relation, closer to God. It is in my relationship that I can feel the kind of love that God pours down on us, the kind God expects us to pour on each other. Not only that, it inspires me to act with love and compassion to others~~that’s pretty big! Jesus Ethics can be planted and take root in places where we talk to one another about compassion and decency and relationships that bring us closer to God. We can change our minds and decide to love.

USA Today: Franklin Graham calls on Pete Buttigieg to repent for the ‘sin’ of being gay

NYT: Pete Buttigieg, Gay and Christian, Challenges Religious Right on Their Own Turf