The Choice to Live Passionately

My Spiritual Formation this week is from What Matters Most: Ten Lessons in Living Passionately from the Song of Solomon by Renita Weems. She takes takes the “ten lessons” from the Shulammite woman’s fearless living and loving in the Song. Interestingly, I’ve heard the Song of Solomon called “The Porn Book of the Bible,” which reinforces masculine patriarchal dominance of Scripture. Weems allows the Shulammite woman to claim her identity through characteristics of liberation. Three quotations from this week’s reading on Choice stood out to me. Here they are with my reflections:
The Shulammite risked ridicule, criticism, challenge, failure, and embarrassment for the possibility of living a bigger life than the one society assigned to her as a woman (Kindle, p. 80).

Societal rules are powerful, so powerful that we internalize them and regulate ourselves. Growing up, I wanted to be a CIA agent or a lawyer. It was inconceivable to me, my parents, my friends—everyone who knew me—that I would not go to college on a scholarship straight out of high school. But gender role norms are deeply embedded in how we think and act and move about in the world. By my junior year I was “engaged,” in a relationship just like the other girls. I was married at age 18 and had a baby when I was 19. I look at those numbers and shudder—so young! I gave up my own bigger life.

Before age 35, I had never lived outside of Alabama. That year, I got divorced, came out to myself, got a job at the Louisiana Department of Education, enrolled in a doctoral program at LSU, and moved to Louisiana. After escaping with my identity—which I had fought for 16 years to hold onto—I did not once ask myself these questions. Like the Shulammite, I was living fearlessly. However, and this is important, my communing with God was a one-way conversation. Although God was ever-present with me, I continued to press through under the delusion that I was accomplishing these things by myself. I give thanks now in retrospect.

But what if the path you’re about to take leads you off the beaten path and falls outside the norm of what others deem acceptable? (p. 87).

On the day I moved to Louisiana, my mother was seeing me off. It was a poignant moment. Two women whose love for one another most often went unspoken, said goodbye. “Mother,” I said, “I’m sorry. It’s hard. I just…” trailing off, not knowing how to speak the things that were in my heart about my life, about her, about all the years I felt I had lost. She thought for a minute, trying hard to blink back tears so that I would not see them—something I learned years later she had often done. “You go ahead. I know you need to. We always knew you’d leave one day.” The beaten path, my parents knew, was not for me, no matter how hard they had tried—through church, modeling, instructing, shaping—to guide me along it. That day, when the strongest women I have ever known blinked back tears and let me leave, was the day I began to live without a net, yes, but in vivid color.

What Matters Most: Ten Lessons in Living Passionately from the Song of Solomon 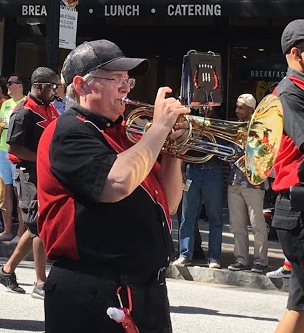 Even though this is one of the happiest moments of my life, I never published this photo because of how I looked. Doing so now is an act of love, kindness, and prayer.

Two words concerning prayer life resonate with me this week: intention and attention. I sometimes fret about my prayer life, especially when I hear my fellow seminarians openly talking about theirs; I even have a professor outside of this class who returns our attention to prayer life. This week’s reading reminds us that naming our longing to be always in relationship with diving (intention) and by paying attention to where we see God in our daily life (attention) remind us of divine presence and grace.

Reflecting this week, I sought connections between my praying self and embodied self. I realized that an important connection is the esteem in which I hold my spiritual and physical being–or the regrettable lack thereof. So I would like now to discuss body issues and return to embodied praying.

I came across two pictures of myself a few months ago. The first was of myself on my wedding day, taken by my new husband. It was a snapshot, and I was looking at him over my shoulder. My first thought was how young and beautiful I was–and at the time I did not realize it. I was never not weight conscious. Realizing the many gaps of pertinent information here, I will say that my husband, who struggled with his sexuality throughout our marriage, had no words to express his inner turmoil; however, he did have words to turn his issues around toward me. One example: I never fixed a plate of food for myself in sixteen years that he did not look at and comment about my weight. As you can imagine, this affected me deeply. I have apologized to the girl in the first photo.

The second photo is of me at about age 37. I am bloated and look unhealthy. No longer married, working on my doctorate, in a new relationship, starting a great adventure in a new state–my body tells a deeper tale. It is one of insecurity, uncertainty, and a different kind of unhappiness. More gaps, I know, but I was struck by this picture in which I looked like a completely different person, one who was dancing–and apparently eating–as fast as she could. I apologized to the beautiful woman in that picture, too.

Reaching middle age–I am 55–has forced me to communicate with my body. I am aware of new aches and pains; it takes me a few seconds of walking before the muscles catch up (I call it having a “hitch in my getalong'”); and I am having to become acquainted with the grayed and wrinkling woman in the mirror. Thing is, I know this body has fewer days left than it has experienced, and that’s ok. When I do see that lady in the mirror, I assure her that she is beautiful and that I appreciate her–that face, that body. I promise her to live in such a way that I will mindfully value her now, in this moment, so that I never look back with regret at failing to do so.

This is what praying with my body feels like–gratefulness to God for my body as a presence in God’s divine creation–no fear of scales or mirrors or photos. Just thankfulness for this familiar likeness.

Coda: I read somewhere that 65% of women report that they have cancelled a doctor appointment because they do not want to step on the scale at check in. I myself have done this. Yes, read that again because it is in fact incredulous. Last week I had my check up. In I walked with the nurse who held my chart and directed me to the scale. “We have to do this,” she said, “but don’t worry, it’ll be over in a minute.” I boldly stepped up on the scale, keeping my shoes and jacket on this time. “It’s ok,” I replied, “I’m good.”

As I write this, another heinous mass shooting has taken place by white supremacists, this time in New Zealand. Almost 50 of our Muslim neighbors were murdered and 20 seriously injured, killed while they were praying. This attack is on my mind and heart as I contemplate this week’s Core Forum on prayer. As one public figure tweeted this morning, “Whether it is antisemitism in Pittsburgh, racism in Charlottesville, or the xenophobia and Islamophobia to day, violent hate is on the march at home and abroad….Silence is complicity.” I include this because the connection is made to multiple groups that are targeted for no other reason than hatred of any particular difference. The city where this atrocity occurred is called, ironically or not, Christchurch.

I have a chaplet that has inspired my prayer this week. If any of you are like I was and do not know what a chaplet is, it is a kind of small rosary–a prayer object–that usually has a saint medallion/object attached to the beads. Mine has two medallions. The first is St. Francis, whose prayer I have always loved, and the other, newer one is Julian of Norwich, whose mystical experiences inspire me. Julian’s words also comfort me like a gentle voice and touch soothes a child: All shall be well, and all shall be well, and all manner of thing shall be well. I also made this quote my phone wallpaper–a postmodern engagement with the 15th century mystic. Still, when I see the words, I pray them. I’m thinking Fundamentalist Evangelicals do not a rule pray chaplets or contemplate icons in our prayer life. That’s unfortunate because for me it has deepened my prayers. Henri Nouwen says, “Icons…lead us into the inner room of prayer and bring us close to the heart of God” (p. 61). Whether icons are kinesthetic like mine, or natural, they open us to the Mystery of God’s presence.

The politician’s quote, above, suggests to us that the end to hatred and violence–peace–comes at a great price: our psychological, emotional, and embodied engagement. I am reminded that when the messages of MLK, JFK, and RFK turned from civil rights to peace, their lives were extinguished. The work of peace is a work of justice, and justice is the nature of God. Thoughts and prayers are not acts of peace in the world; prayer is that place of mystery where we might know that all will be well. Prayer is the interior castle (Teresa of Avila) where we are lost with and strengthened by our Beloved. Prayer is not what we do for the oppressed; prayer is what we do for ourselves so that we can have the strength to do the hard work of justice. God waits for us.

Coda: When John Lennon’s “Imagine” was released in 1971, it scared people–Christians who feared the new peaceful, global social order it suggested. In an interview with Playboy magazine, Lennon said that Dick Gregory had given Ono and him a Christian prayer book, which inspired the concept behind “Imagine.” A prayer book. He said,

The concept of positive prayer … If you can imagine a world at peace, with no denominations of religion – not without religion but without this my God-is-bigger-than-your-God thing – then it can be true … the World Church called me once and asked, “Can we use the lyrics to ‘Imagine’ and just change it to ‘Imagine one religion’?” That showed [me] they didn’t understand it at all. It would defeat the whole purpose of the song, the whole idea. (Wikipedia).

They were right to be scared, for it calls for an end of systems of domination, by definition the domain of the dominant culture. I wonder if we are any more willing to pray it today.

The lyrics are below.