Somebody I used to know once told me she thought happiness was overrated. I’ve thought about that statement for going on a dozen years now, and I think she was wrong. Well, I think she was talking about pleasure, about following one’s desire, about gratification–and all of these are different from happiness. Not only is happiness not overrated, I don’t believe it is rated nearly highly enough on our collective list of priorities.

I was recently on a long, 9-hour drive from Atlanta to South Florida when I began running through my usual thoughts: money, work, goals, writing, weight. I was even running scripts through my mind of events that I envisioned happening so that I would have a ready response. For example, I pictured a scenario in which my boss asks me to assume additional duties at work. I was amazing myself at my sardonic, pointed remarks to her. Then I thought to myself, “I have a 9-hour drive and I am going to sit here and make myself miserable the whole time? This is my vacation, what if I only thought happy thoughts the whole drive, heck, the whole trip?” So I practiced. I made myself happy, or so I thought at the time. Looking back, I think it’s more accurate to say, I rejected negative thoughts for positive ones. Happiness, a deceptively simple notion, is more complicated than it seems.

I’m reading a book by Barbara Ehrenreich called Bright-sided: How positive thinking is undermining America. Ehrenreich has nothing against positive thinking per se, but she argues it has become a tool to lull Americans into compliance with a neo-liberal, consumerist culture. It is, according to her, in the best interest of institutions to keep the population thinking positively because it deflects attention off inequities of capitalist society by focusing on ourselves. Be positive, work harder, pick yourself up, you can do it (!), you deserve it, and my own personal favorite, “everything is going to be just fine/work out….” Ehrenreich goes on to present some amazing survey results: even though we Americans have embraced the power of positive thinking, we don’t report that we are very happy. There are plenty of other, frankly, negative countries whose people are happier than we are. Being happy is not the same as thinking positively. Positive thinking is something you can choose to do; and while I’ve heard it suggested that we “choose happiness,” I think it is more of a state of being. I”m sure the two are connected somehow, and maybe I’ll think about that later.

I can be negative. I am often cynical and suspicious (of politics and banks, for example). I get the blues and feel lonesome. I come from a long line of worriers–it would have been a piece of cake to have found something to worry about the whole drive down to Florida. But, I am a happy person. I am not jolly, and I don’t feel euphoric all that often. So am I sure about this happiness thing? Yeah, I’m sure. I haven’t figured out yet whether happiness is situational, contextual, or even genetically influenced. In fact, I have just begun to think about it at all–apart from that comment about it being overrated all those years ago. Lots of thing “make me happy”: music, Taco Bell, marathons on TNT, watching the ocean, people in my life. But really, I think these things bring me some joy; they bring me feelings of happiness. Happiness, it seems to me, is what you are left with if feelings were stripped away. I think it would and should be articulated differently by different people. For me, it is serenity of the soul. But that’s just a way of saying it. Can one “get happy”? What is happiness? How does happiness fit in with the violence all around us? That is, can our own happiness intersect with that of others? What does that look like? What good does being happy do us? That’s a lot of questions for something so taken for granted.
More on this later. 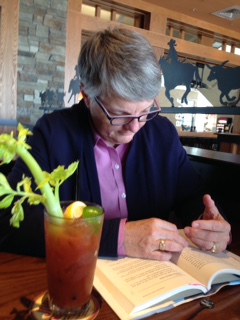